RSS Feeds Subscribe to Alerts
Alumna Spotlight: Anica Scott-Garrell '01
In December 2013 at the Capitol Theatre in Sydney, Australia, the curtain opened on the Disney Theatrical Production The Lion King. In the audience were almost two thousand musical theater enthusiasts, eager to see the stage-adaptation of the beloved Disney story. On stage was Anica Scott-Garrell ’01. Initially cast in the ensemble, Scott-Garrell ultimately danced, sang, and played the part of Shenzi with the Australian company. While her time with the award-winning show has been a highlight of her career thus far, Scott-Garrell does not consider it a laurel on which to rest. She is always looking forward, challenging, and empowering herself to achieve.
“My goal is to be a triple threat – a dancer, singer, and actor,” she said. “Technically, dancing is the hardest of these arts to develop, but dancing is the one that has always come more easily to me.[Former Newton Country Day dance faculty member] Kathy Hassinger saw how passionate I was about dance and really pushed me to achieve more. She was the one who told me I could actually get a degree in dance.” Scott-Garrell graduated from Fordham University with a Bachelor of Fine Arts, which she earned at the Lincoln Center Campus majoring in dance and liberal arts. “I tell students to go with their passion, but to also think logically. That is what I did by choosing a school that is not a conservatory. I wanted to broaden my opportunities even as I developed my primary art, which of course is dance.”
During her senior year at Fordham, Scott-Garrell danced with the Complexion Dance Company, founded by choreographer Dwight Rhoden and dancer Desmond Richardson. “I apprenticed with the company my senior year of college. That experience was truly challenging and rewarding, as I was surrounded by breathtakingly amazing dancers of the highest caliber. I battled a lot of what I now know is imposter syndrome, but I fought through those feelings and took on the challenge of learning repertoire that was mentally and physically challenging. Completing that experience gave me confidence in my artistry.”
Immediately after graduation from Fordham, Scott-Garrell was one of only 12 dancers invited to join the internationally renowned Ailey II Company, for which she danced for the next two years. “This was another monumental spoke in the grand wheel of my development as an artist. Not only was I a part of the Alvin Ailey legacy via study at the Ailey School, but now I was forever part of an echelon of dancers that have had the experience of learning and performing Alvin Ailey's repertoire. Once an Ailey dancer, always an Ailey dancer! It's like being part of a family.”
Feeling the need to grow and develop beyond dance, Scott-Garrell left Ailey II in 2007 and went back to auditioning and taking singing and theater classes whenever she could. “Some artists feel a sense of relief when they book a job, and they relish the downtime that comes with a regular schedule,” she said.“I don’t do that. Whenever I book a job, I put that money and any time I have toward theater or voice lessons. In order to be a triple threat, I need to hone all of my performing arts abilities. Each discipline has a standard that you must meet in order to book jobs, and each art requires a certain level of skill that you simply cannot feign. I am committed to using my resources to upscale my marketability.” 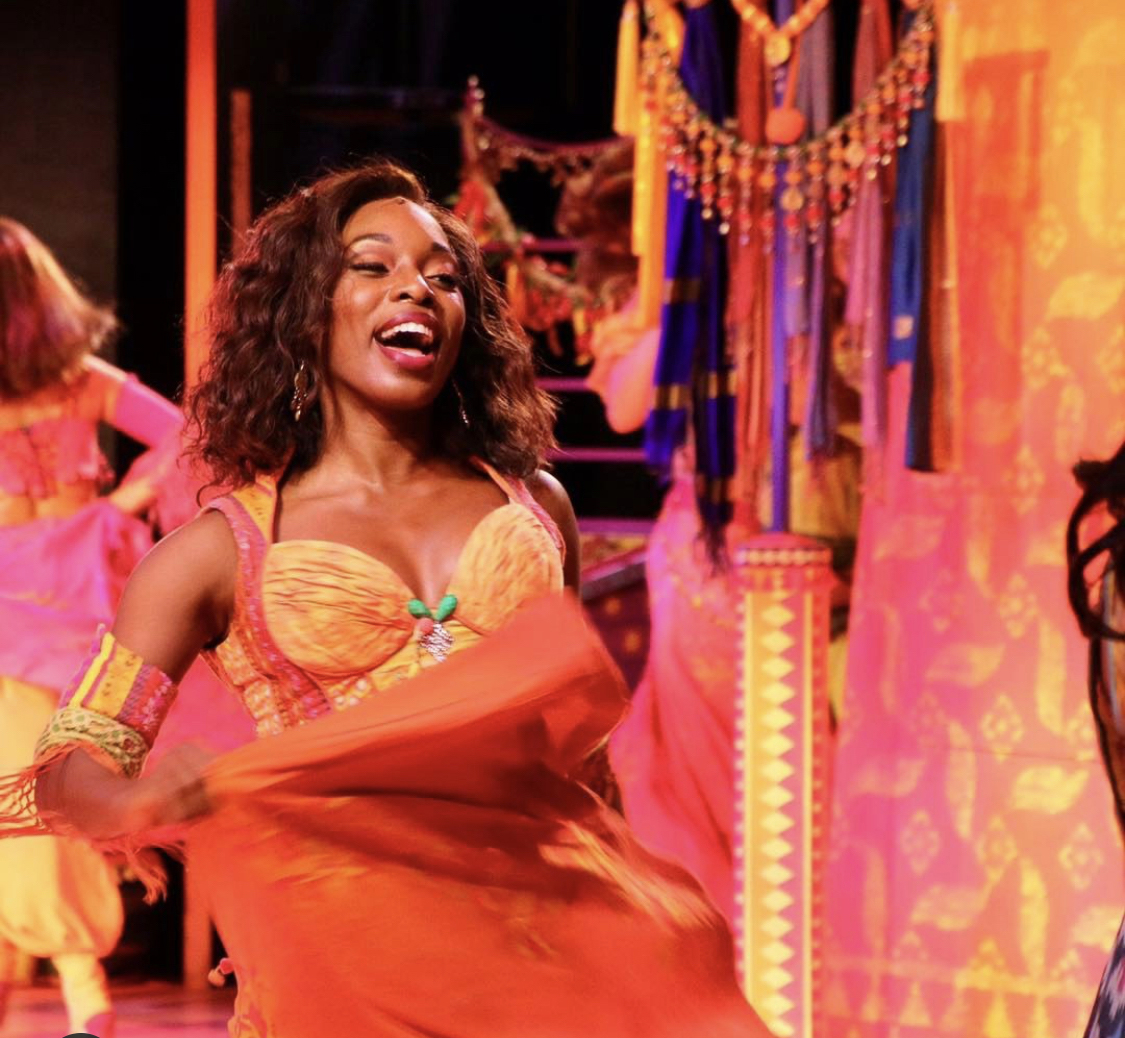 Post-Ailey II auditioning went well, and Scott-Garrell was hired as a dancer on which to bring to life Maksim Chmerkovsky’s choreography for the ballroom dancing portion of Le Reve at the Wynn Resort is Las Vegas. “Mr. Wynn himself wanted to include ballroom dance. I was hired in New York to work with professional dancer Maksim Chmerkovsky, who choreographed the Paso Doble that is now done in the show. I moved from New York to Las Vegas and was part of six dancers who helped workshop the choreography. The show itself went dark, which means it didn't run any performances for about six weeks while this new element of the show was created on us. It eventually premiered in the fall of 2007,” she explained. When she was offered a position as a steady extra, Scott-Garrell turned down the contract. “I saw myself as a lead, and I wanted to continue to grow into my goals. It took courage and confidence to turn down that opportunity, but at NCDS I learned that I need to have the guts to really know and apply myself. I knew that job was not for me.”
Returning to New York City, Scott-Garrell felt the need to take a pause from the performing arts. “I took a two-year break from dance and worked as a paralegal. I did it for a while, but I knew I needed to get back into what I really wanted to do, which is musical theater and dance. It was nice to know that I could join the ranks of the world outside of the arts. Of course, that wasn’t where my passions lay, but now I can read a contract and better understand what I am getting into!” Her return to performing arts included a job as a backup dancer for singer Jordan Sparks in 2009 for Divas Live on VH1.
After two years outside the arts world, Scott-Garrell was hired by Disney Cruise Ships for an eight-month performance commitment. “This was a challenging experience. It wasn’t exactly what I wanted to do, but I worked really hard, finished my contract, and walked away able to pay six months’ rent up front and enroll in myriad theater and voice lessons in order to get to the next level.” Scott-Garrell’s commitment to “upscaling” her marketability worked. “I auditioned for The Lion King, and two months later I got a call asking if I wanted to join the Australian company.”
After performances in the chorus, Scott-Garrell was asked to play the role of Shenzi. “That was a milestone in my career. Whoopi Goldberg originated the role in the movie, so I was very honored to do it. While performing in the chorus I was taking acting classes and working on my singing. To audition and book the role after performing in the show as a dancer was monumental for me. I had set a goal and manifested a dream of moving from ensemble to principle and proving to myself that I have what it takes to realise any goal that I envision.”
Accepting a role on the other side of the world might have been harder had Scott-Garrell not had the benefit of Newton Country Day’s global vision. “I was exposed to so many different cultures at Newton, whether through intense study of Judaism in 9th grade or through engaging with our International Network. I remember going to Israel and thinking back to 9th grade religion class, remembering when I braided my own Challah. I have been to Thailand, Russia, Bali, and many other places. Thanks to NCDS, nothing has felt truly foreign. No travel or immersion in another culture has seemed so far fetched that I felt as if I couldn’t do it. I knmoiow that Newton is a big reason for that and thinking about that is certainly a full circle moment for me.”
As The Lion King wrapped its Australian run, Scott-Garrell decided to audition for world renowned choreographer and director Casey Nicholaw’s Aladdin, which was also slated to run in Australia. Aladdin moved into Sydney’s Capital Theater, and Scott-Garrell stayed with the show for two and a half years.
While in Australia, Scott-Garrell met her partner, who is also in theater. “By the time I was finishing up with Aladdin, he was on an international tour with The Lion King. I joined him in Singapore where I lived for a few months while decompressing from five years of stage performance.” During this time, Scott-Garrell also planned her next move and set sights on a new goal: Broadway. “I came back to the United States – to New York – a true triple threat and was cast in an off Broadway show, Safe Word. I am understudying the lead role and am scheduled to perform a two-week run.”
Scott-Garrell continues to audition and recently had a “really good run auditioning for Hamilton,” making it through multiple levels of review. As ever, Scott-Garrell will continue to pursue her passions logically. “I will always work to improve my artistic abilities so I can break into the next level. I truly believe that it’s a matter of time. I just need to keep on showing up.”
Share to FacebookShare to TwitterShare to Google+Share to LinkedInShare to PinterestShare to EmailPrint this page