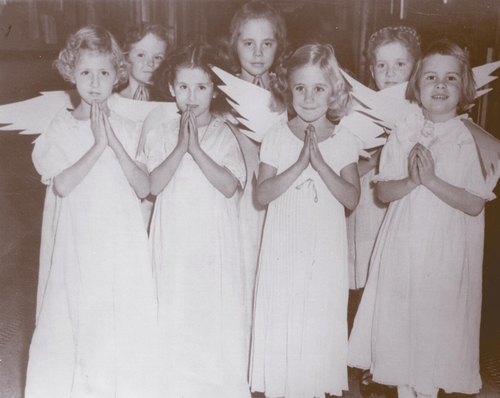 In 1879, Mother Sarah Jones, Superior Vicar in the Society of the Sacred Heart, convinced Boston’s Archbishop John Williams that a Sacred Heart School for girls would flourish in the city. On April 5, 1880, four Religious welcomed eight girls as the inaugural class to 5 Chester Square in the South End, now the corner of Massachusetts Avenue and Washington Street. The Boston Academy of the Sacred Heart became the twentieth Sacred Heart School to open in the United States. During the 46 years that the school was situated in Chester Square and later in the elegant Back Bay brownstones on 260-266 Commonwealth Avenue, it enjoyed a rich and storied history.

Kings and queens, cardinals and Papal legates, and Supreme Allied Commander Marshall Foch numbered among the many visitors to the school. Among the earliest students enrolled were the daughters of Boston Mayors Hugh O’Brien, James Michael Curley, and John “Honey Fitz” Fitzgerald, the most well-known being Rose Fitzgerald Kennedy. 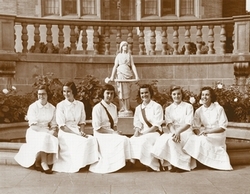 The school became the center of many cultural and outreach programs. Educators from Harvard, MIT, and Wellesley College; and renowned writers, scientists, historians, and artists from around the globe were guest lecturers. Sacred Heart alumnae gathered to transcribe books into Braille, to raise funds for chaplains’ kits and ambulances needed in World War I, and to make vestments for mission churches; students hosted gatherings for children in the city’s orphanages; and the Religious conducted language, sewing, and religion classes for city and immigrant families.

By the mid-1920s, the school outgrew the space. On December 4, 1925 the Boston Academy of the Sacred Heart exchanged its four Commonwealth Avenue townhouses for the Loren D. Towle estate in Newton. Mr. Towle was a prominent real estate executive, philanthropist, and city activist. The renowned architectural firm of Maginnis and Walsh constructed the Chapel and four-story school wing. The grounds of the Towle estate were designed by the legendary Olmstead firm. In 1990, the estate was placed on the National Register of Historic Places.

Over the ensuing decades, the school responded to the needs of changing times. A weekly boarding school was opened in the Depression era; lower athletic fields were turned into victory gardens to assist World War II food pantries; a gymnasium/auditorium was built in 1960. A Board of Trustees, a student government, and a set of common Sacred Heart Goals and Criteria transformed the school’s organizational structure in the post-Vatican II years. A greater number of students of various ethnic, religious, and economic backgrounds from diverse neighborhoods strengthened the multicultural community that the school, as a microcosm of society, sought to establish.

In 2002, the Sweeney-Husson building, which houses a theatre, science labs, and a Middle School space, was completed. Rooted in the Sacred Heart mission, a student body of approximately 390 hails from more than 50 communities around Boston. Among them are Presidential Scholars, National Merit Scholars, Massachusetts State Science Fair winners, Massachusetts Drama Festival finalists, All-Scholastic athletes and artists, and strong social activists.

In 2007, the Classroom and Library building opened. In 2016. the community celebrated the opening of the Kathleen R. Martin Wellness Center.

“Inspired by more than 210 years of Sacred Heart education throughout the world, the work of education is challenging and engaging. A fidelity to the Sacred Heart mission fuels an ambition to excel in all things intellectual and to commit to social awareness that impels to action,” states Headmistress Sister Barbara Rogers. “The school today is in a position of tremendous strength. Mission focused and driven, we are clear about our identity as a Catholic, independent, girls’ school, and we are energized for the next stage.”